16 and Pregnant & Teen Mom Wiki
Register
Don't have an account?
Sign In
Advertisement
in: Cast members, Deceased, 16 and Pregnant,
and 5 more 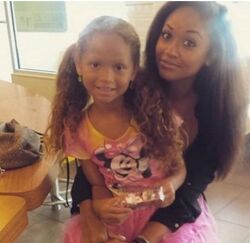 Valerie Fairman (born on October 6, 1993) was 15 years old when she gave birth to her daughter, Nevaeh Lynn Fairman (with her ex-boyfriend, Matt Pryce) on September 14, 2009. She was featured on Season 2, episode 3 of 16 and Pregnant.

Valerie's episode focuses on her desire to return to public school, Matt's initial denial of paternity, Matt's plans to move over an hour away, and her desire for a family unit for her daughter being that she struggles with emotions surrounding her own adoption.

In February of 2015, Valerie was arrested in Delaware for prostitution. On December 21, 2016, she died of a suspected overdose at the age of 23. Her adoptive family retained custody of Nevaeh.