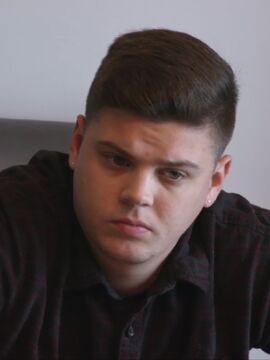 Tyler Baltierra is the sixteen year old boyfriend of Catelynn Lowell, and the father of their unborn daughter. Tyler knew as well as Catelynn that they were in no place to raise their daughter, and chose to set up an open adoption with Brandon and Teresa Davis . They did not have the support of their families. On May 18, 2009, Tyler became a father after the birth of his daughter, Carolynn Elizabeth Davis. He and Catelynn were in tears as they handed over their daughter to her adoptive parents, outside of the hospital.

Teen Mom focuses on four teenage mothers from the 1st season of 16 & Pregnant. It shows the girls' struggles with motherhood and the strains on their relationships with family and romance.

During the show, Tyler and Catelynn take a lot of time to get around the fact they put their daughter up for adoption but they're an integral part of the show; proving to young couples that there are other options. They are shown to have a good relationship with their birth daughter, Carly's adoptive parents as well as Carly herself.

The couple did go through some relationship troubles after Catelynn is caught lying several times but they worked through them and eventually got engaged after attending therapy.

In Season Five (alo known as Teen Mom OG), Tyler stated he didn't agree with Farrah's return to the show due to the nature of her past decisions and the message the show is trying to put across. During the course of the season, he helps Catelynn through the pregnancy; helping her keep her diabetes under control, supporting each other over the daunting prospect of becoming parents once again and thinking of his future career.

Tyler graduated high school in 2011. He is currently attending Baker College and his major is in psychology with a minor in creative writing. Baltierra has stated that he wants to become a social worker, with the aim of working with at-risk youth.

In 2013, it was reported that Tyler and Catelynn gained legal guardianship of a younger sister. This was later confirmed via Tyler's twitter account .

Catelynn and Tyler co-wrote a book together - 'Conquering Chaos' - in it they "tell their story in their own words". The book was released in March 2015.

Click here to see the photo gallery for Tyler Baltierra.