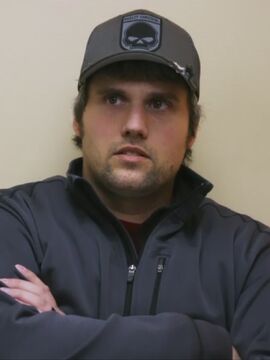 Ryan Edwards is a supporting cast member on Teen Mom OG. He is the ex-fiancé of Maci McKinney (née Bookout), husband of Mackenzie Edwards (née Standifer), as well as the father of Bentley, Jagger, and Stella Edwards.

Ryan Edwards is the ex-fiancé of 16 & Pregnant/Teen Mom star, Maci Bookout and the father of their son, Bentley.

Maci's episode of 16 & Pregnant focuses on the couple's reaction to Maci's surprise pregnancy. It shows Ryan's indifference to the whole situation and the struggle that parenthood puts on their relationship due to Maci taking on most of the workload.

The couple were due to get married but Ryan's indifference to their child as well as planning a wedding caused Maci to end the relationship in the garage of Ryan's parents' house.

Teen Mom focuses on the lives of four teenage mothers and their journeys through parenthood. It looks at their struggles with raising a child at a young age, holding down jobs, keeping relationships strong and maintaining romance.

Ryan and Maci's relationship is strained throughout the show with both sides unable to communicate properly when it comes to her son, Bentley and visitation schedules. The couple argue regularly with Ryan often feeling that Maci is purposely difficult to cause him problems. Due to Maci's strong relationship with Ryan's parents, Ryan often feels he's being ganged up on.

Ryan had a relationship with another girl named Dalis, who he was with for approximately a year.

Ryan is shown with a new girlfriend, Shelby who's also shown to have a good relationship with Ryan's parents. They lived together for two years but split up around the end of season five of the show.

When Maci tells Ryan of her pregnancy with her new boyfriend, Taylor; Ryan is shown to be surprised but not upset. He is shown to be quite supportive and seems to approve of Taylor being present in both Maci and Bentley's life but, unfortunately, this goodwill does not last. Ryan eventually married Makenzie Standifer.