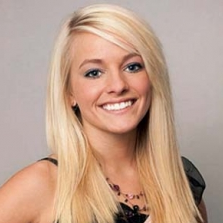 Mackenzie McKee (nee Douthit) was a 16 year old cheerleader from Miami, Oklahoma and in a relationship and expecting her first child with boyfriend, Josh McKee. On September 12, 2011, Douthit gives birth a baby boy, Gannon McKee via C-section. On February 7, 2014, Douthit had given birth to a girl named Jaxie Taylor. On August 14, 2016, she gave birth to a baby boy named Broncs Weston.

Douthit’s 16 and Pregnant episode was the first of season 4 to air. Douthit was billed to be another All American Sweetheart with her spunky attitude and southern charm[1].

Douthits episode centers on her attempt to have a “normal” life even though she is expecting. Douthit has dreams of being a professional tumbler and Mckee has dreams of being a professional rodeo rider. While in the beginning of her pregnancy it was obvious that Douthit and Mckee were taking it lightly however as her due date approached they began to get more serious, especially considering that Douthit’s type 1 Diabetes is complicating her pregnancy[2]. Douthit started to pressure Mckee to stop rodeo. While originally she supported his dreams for rodeo now that she realizes that she needs his help to raise the baby she is worried about his safety. It’s revealed that he has already suffered several concussions[3].

Douthit is doubly scared for his life when she receives a phone call telling her that Mckee was in an accident. Mckee is forced to wear a neck brace after the accident which solidifies Douthit’s stance on his rodeo career. Concerned that they will be losing the money Mckee earned from rodeo both Mckee and Douthit try to find jobs[4].

Shortly into her junior year Douthit went into labor. After seven hours of active labor the doctors determined the baby was too big for Douthit to deliver naturally and give her and emergency c-section[5].

As time nears for Douthit to return to school she realizes how expensive day care is. Mckee steps up and agreed to watch Gannon and even moves into Douthit’s family’s house[6].

The first season of Teen Mom 3 was a turbulent one for Douthit. At the beginning of the season we discover that Douthit and Mckee are engaged, however Mckee has moved out of Douthit’s home leaving her and her very supportive family to take care of Gannon on their own[7].

During the first episode Douthit and Mckee celebrate their second anniversary, however Mckee seems less then excited to be there. Their relationship just spirals downward from there[8].

In an attempt to make Mckee happy Douthit tells him that she would be ok with it if Mckee started to compete in the Rodeo again. Douthit is excited to cheer him on and be supportive but Mckee doesn’t even care if she shows up[9].

Douthit has a harder and harder time contacting Mckee who claims the reason for this is that he is spending most of his time training for the rodeo. Douthit decides that she is going to go watch one of his rodeo practices only to find out that Mckee hasn’t shown up to any of those practices in weeks, if not months[10].

Understandably upset Douthit and her mother Angie confront Mckee and he seems to be indifferent about whether they remain a family or not[11].

Douthit decides to keep fighting for them and they have several ups and downs. Then finally in the season finally things are starting to look up and Mckee even agrees to go to couples therapy with Douthit. However, on the way there the two have the largest fight that we have seen so far and the season ends with things looking bleaker than ever for the couple[12].

Mackenzie Taylor Douthit is from Miami, Oklahoma where she was a cheerleader at Miami High School. She was born October 17, 1994. In addition to cheerleading she enjoys riding horses, something which probably helped her meet bull rider Josh Mckee, a lifetime resident of Wyandotte, Oklahoma[13].

Douthit and Mckee started dating February 24, 2010 and Douthit gave birth to Gannon less than a year later. In February of 2013 Douthit revealed that Gannon was the couple’s second pregnancy and that Douthit suffered from a late term miscarriage of a boy that they named Oakley [14]. Many people theorized that this would be a major plot line in Teen Mom 3, however as of season 1 it has not been mentioned.

Douthit’s mother Angie Douthit is a 3rd grade teacher, and Douthit has started that her mother is always the shoulder that she cries on when things are going wrong. Douthit’s father is Brad Douthit, and she has two sisters Whitney, and Kaylee, and a brother Zeke[15].

Since filming wrapped for Teen Mom 3 season one Douthit and Mackee have gotten married and recently had a baby girl they named Jaxie Taylor who was born on Feb 7th. However, the second pregnancy was very complicated with Douthit’s blood sugar frequently bottoming out, a broke foot, and an incident where she was dragged across a porch by her hair[16].

Douthit is working through a special program at her high school that will allow her to not only graduate high school but also be certified as a beautician[17].

Douthit had an adoptive brother with Down’s syndrome that passed away while Douthit was in middle school. Her mother, Angie, has published a book about the family’s experience[19].

We find out early on in the episode that Douthit got pregnant because she wasn’t using birth control out of the fear that it would make her fat[20].

Douthit is the most openly religious Teen Mom and is the only one of her siblings to not wait until marriage[21].

In the first season of Teen Mom 3 Douthit gets an IUD against her mother’s wishes. Later Douthit removed it herself against Doctor’s advice because she believed it was messing with her health[22].

During the first Season of Teen Mom 3 Douthit had an affair with another boy, however she did this in secret so it was never filmed for the show[23].