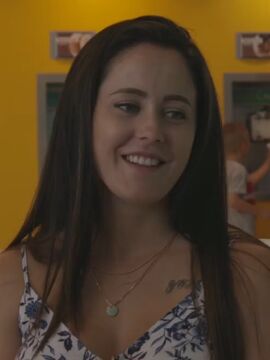 Jenelle Lauren Evans born on December 19, 1991 was an incoming high school senior who lives in Oak Island, North Carolina. The father of Jenelle's child is her boyfriend, Andrew Lewis, who she later ended the relationship with because he got arrested.

On August 2nd 2009, Jenelle gave birth to Jace Vahn Evans. Even after giving birth, Evans continues to slip back into her partying ways, leaving her mom to take care of Jace. The rest of Jenelle's episode focused on her continued partying and her reliance on her mother, Barbara. She agreed to focus more on spending time with her son but asked for her mother's help as she never felt capable of caring for him alone. Jenelle signs over custody of Jace to her mother Barbara.

Teen Mom 2 continues the story of four mothers from the original show, 16 and Pregnant.

Jenelle continues to reconcile the responsibilities of motherhood with her love of partying. With her son Jace's father, Andrew, not around, Jenelle relies heavily on her mother, Barbara, to take care of Jace. Jenelle and her mother have an explosive relationship which is amplified by the fact that Barbara has custody of Jace. Jenelle struggles to prove herself as a mom and a responsible adult but her partying habits tend to creep up on her.

Jenelle Evans and her boyfriend Kieffer Delp, were arrested on October 15, 2010 for breaking and entering and drug possession. According to police report officers found them in a vacant property in their hometown of Oak Island. She plead guilty and was sentenced to 12 months of supervised probation and a monthly drug and alcohol test. Prosecutors dropped the drug-possession and breaking-and-entering charges, and on May 6 dropped the paraphernalia charge after Evans had completed 24 hours of community service. She bailed her boyfriend Kieffer out of jail.

Evans was arrested again on March 28, 2011 for assault after a video surfaced of her in an altercation with another teen named Brittany Truett. She was booked into Brunswick County Detention Center in North Carolina and released on bond. In May 2011, Evans checked herself into a rehab center in Malibu, California. She was again arrested on August 8, 2011, for violation of her parole. According to her lawyer, Evans had a meeting with her parole officer and tested positive for marijuana and opiates.

Evans was arrested for a fourth time on January 10, 2012 for allegedly making harassing phone calls and communicating threats to former roommate, Hannah Inman. She was released after posting $1,000 bail. Evans would be taken back into police custody six days later on January 16, 2012 for violating a domestic violence protection order. She was due back in court on March 23, 2012. On April 24, 2012, all of her charges were finally dropped.

Click here to see the photo gallery for Jenelle Evans.