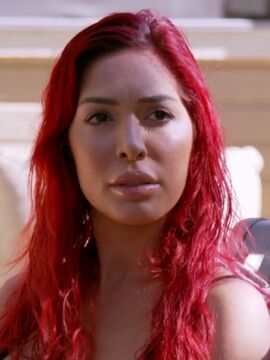 Farrah Abraham is a former regular cast member on Teen Mom OG and featured on 16 and Pregnant.

Farrah was a cheerleader, an aspiring model and cook from Council Bluffs, Iowa, when she discovered she was pregnant at 16. Farrah decided to leave school and continue her schooling in the community college as the rumors of her pregnancy became widespread. It was revealed on the show, that Derek died in a car accident on December 28th 2008, two months before the birth of his and Farrah's child. Despite not being together at the time, Farrah said that Derek was 'her first and only true love.' Farrah stated that she was denied an abortion due to it being against her mother, Debra's beliefs.  In February 2009, Farrah gave birth to Sophia Laurent Abraham.

Throughout the spin-off show Teen Mom, the relationship between Farrah and her mother, Debra Danielson, becomes extremely strained. In January 2010, Debra was charged with assault in an Iowa court, after a 'physical argument' with Farrah. In the aftermath of this assault, Farrah and her daughter left Debra's home and moved into an apartment. Farrah attended therapy to work on her relationship with her family. She also discussed her emotions regarding the death of her ex-boyfriend and Sophia's father Derek Underwood.

It is revealed on the show that Derek's family were unsure about the paternity of Sophia. Farrah took a paternity test, this test states that Derek is indeed Sophia's father. In the aftermath of receiving these results, Farrah faced a lawsuit from Derek's mother. This lawsuit saw Derek's mother look for 'grandparents visitation rights'.

Farrah returned to the Teen Mom show during a special episode entitled 'Being Farrah' which looked at her journey from 16 & Pregnant, Teen Mom and her personal life in between. Due to the success of the specials (three other episodes featured Maci Bookout, Amber Portwood & Catelynn Lowell), MTV bought back another season of Teen Mom entitled Teen Mom OG. Farrah was originally not included in the first few episodes but was asked to come back, causing a rift between the other girls who thought her presence was a bad influence on their kids.

Farrah began a relationship with Simon Saran during the OG season of Teen Mom. The couple's relationship became strained after Farrah insisted on him asking her to marry him early on. They split up in the early months of 2015.

In 2011, Farrah enrolled and attended 'The institute of Fort Lauderdale with the hopes of graduating with a degree in Culinary Arts and Management. Farrah launched her own pasta sauce line named 'Mommy and Me', with her mother Debra Danielson and grandmother Carmella Danielson. Farrah left school before completing her degree due to "work reasons".

Farrah wrote and released a memoir under the same title (My Teenage Dream Ended) and it was released on August 14 2012. Farrah released a second book in December 2012. The book titled, Passy Perfume, was aimed towards children.

Farrah appeared on YouTube show, The Moms View in July 2012 and was interviewed about teenage motherhood. Farrah also appeared in popular Youtuber Shane Dawson's video, where she was interviewed by his alternate personality 'Shananay'. Farrah created her own Youtube account in June 2011 and has 23,720 subscribers respectively.

Farrah was sentenced to six months probation in June 2013 for driving under the influence.

Despite originally stating the footage was 'leaked', Farrah admitted she'd hired pornographic actor, James Deen and produced a sex tape with the intention of selling it. The sex tape was titled 'Farrah Superstar: Backdoor Teen Mom'. In April 2013, it was reported that Farrah received 1.5 million dollars from Vivid Entertainment, when she sold the material. She justified selling the film as 'celebrating your awesome body and getting your own sexy shots'. Farrah has since said she was 'drugged and raped more than once' at pornographic conventions and strip clubs during appearances she made after the tape's release.  After the comments made about being assaulted the relationship between Farrah and Vivid Entertainment became strained. They released a second pornographic video titled 'Farrah 2: Backdoor and More' along with the press release statement saying 'it's no fake or leak- it's the real, raw, ridiculous deal and it suits Farrah's underhanded personality well'. - it is reported she recived $1 million for it. In September 2013, Farrah created moulds of her breasts and private parts for a sex toy line.

In March 2014, Farrah tried her hand at the music industry once more. She released a song named 'Blowin' alongwith with an accompanying music video. She stated the music was 'a hobby, not my career move'.

In July 2014, Farrah released her own line of sex toys. In August of the same year, Farrah signed a contract with Palazio's Gentlemans Club in Texas for $544,000 dollars for a residency until New Year's Eve.

Click here to see the photo gallery for Farrah Abraham.