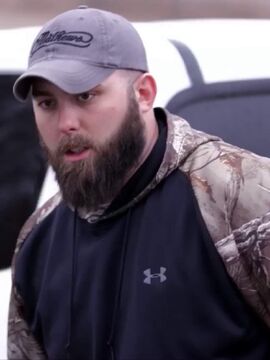 Corey Tyler Simms and Leah Messer began dating in 2009. Simms had only been dating Messer for a few months when she discovered she was expecting twins. At six months pregnant, Messer went into early labor, which was calmed with medication; however, it meant that she had to be on strict bed rest for the remainder of the pregnancy. Two months later on December 16, 2009 Leah gave birth to twins Aliannah Simms and Aleeah Simms.

After the twins' birth, the relationship between Simms and Messer became strained. As a couple they weathered many ups and downs, as documented on the show, from trust issues, to numerous doctor visits with their daughter Ali (Aliannah).

Simms and Messer separated briefly in early 2010, Messer was unsure about what she wanted. It is during this period of separation that she began seeing her ex-boyfriend Robert "Robbie" Kidd, however the relationship soon ended.

Simms and Messer decide to revive their relationship and become engaged in 2010. In October 2010, just before the twins’ first birthday the two got married. In April 2011 Messer admits to infidelity. Simms and Messer divorced in June 2011.

Simms and Messer became concerned for daughter Ali as they noticed that she was developing slower then her sister Aleeah. After numerous trips to the doctor and after carrying out many test, the two eventually learn that Ali suffers from Titin muscular dystrophy, a very rare form of the disorder that has only ever been found in adults.

In June 2012 Corey met Miranda Patterson. The pair got engaged in December 2012 and were married on June 7th 2013. They have one daughter together - Remington Monroe Simms - who was born November 8th 2015.