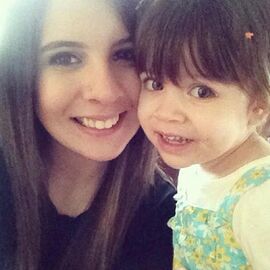 Ashley Salazar of McKinney, Texas was 17 years old when she became pregnant with her daughter, Callie Danielle by her ex-boyfriend, Justin Lane.

She and her mother agree that giving Callie up for adoption is the best option because neither of them have the resources to support a baby, so Ashley makes an adoption plan with her aunt & uncle.

After giving birth to Callie on December 16, 2009, Ashley has a hard time signing the adoption papers, but she eventually does so; however, after a few days, her aunt & uncle allow her to have a "trial period" with the baby which lasts for a month before Ashley finally decides that giving Callie to her aunt & uncle is what's best for her.

In 2012, Ashley wrote a book called "Bittersweet Blessing: 16 & Pregnant." In 2014, she and Justin got engaged; they were pregnant with their second child, but she suffered from a miscarriage. She also graduated from the University of North Texas.

On January 7, 2017, she and Justin welcomed their son, Phoenix Roy. As of 2020, Ashley and Justin are no longer together; Ashley raises Phoenix as a single parent and Justin has since moved to Florida.