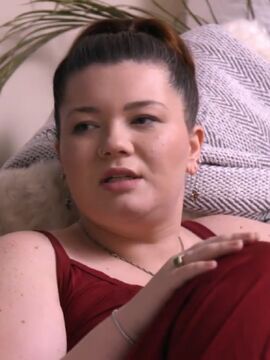 Amber Portwood from Anderson, Indiana. She participated in the show, when she and her then boyfriend of two-and-a-half years : Gary Shirley, discovered that they were expecting their first and only child together. In November 2008, Amber gave birth to : Leah Leann Shirley. At the hospital, Shirley gets a call from Portwood's brother, Shawn, who is coming home from Iraq the next day. After seeing Shawn, Portwood starts to get stressed out. After settling into a normal routine, Portwood and Shirley become nervous about Leah's breathing. They take Leah to a specialist in Indianapolis, Indiana where they learn that it was just the swelling of her voicebox. Shirley proposes to Portwood and she accepts but their relationship remains rocky.

Footage of Amber Portwood's violent behavior towards the father of her child, Gary Shirley, prompted an investigation from the police department in Anderson, Indiana as well as Child Protective Services. On October 20, 2010, The Today Show aired a segment revolving around the depicted domestic abuse in both seasons. NBC's Dan Abrams discussed the possible legal consequences Portwood could face under Indiana law, and under the maximum punishment, Portwood could be charged with three felonies (conducting abuse in front of a child under 14, domestic violence, along with several related misdemeanors). Police have searched Portwood's apartment, finding "evidence that requires further investigation", although they would not specify what had been found. On June 5, Portwood was sentenced to five-years in Jail and have put her on a drug rehabilitation programme.